To celebrate my 30th birthday I took a week off of work and Molly and I took a road trip to Vancouver, Victoria and Olympic National Park.

Molly and I had been to Vancouver when we were 19. We drove up from San Francisco with very little money in our pockets but had fun exploring the beautiful city and despite our cash flow situation, we enjoyed being able to drink in bars, two years short of the U.S. drinking age. In one bar in particular we ran up a nice long tab sipping gin and tonics and playing pool all night. Just as I went (somewhat frightened) to pay the bill, the power shut off in the bar. “All the tabs have disappeared,” the bartender told us a few minutes later, “there’s no way to know what you’ve ordered so we’ll have to just comp you tonight.” We left a good tip and celebrated our luck on the walk back to our hostel. The next night, still 19 and still absolutely giddy over being able to drink at a bar, we went back to the same place, drank enough to make up for our free drinks the night before and the power went out AGAIN. That night we celebrated another great fortune with hot dogs on the street which Molly has always declared to be the best she’s ever had (and she’s a hot dog connoisseur). Vancouver has it all.

11 years later, celebrating my entrance into decade number three, we decided to revisit what we considered the world’s best city where the free drinks and hotdogs flow like wine. We rented a nice flat in the West End and spent the day walking around town. We walked along the shore to see crowds of people biking along paths enjoying the perfect summer day. We spent a good hour on a bench near a bike path watching bikers dodge stubborn geese who blocked the path, sipping water from a puddle refusing to move. One cyclist and two roller bladers lost the game of chicken which ended in some of the best displays of physical comedy we’ve ever witnessed. (Vancouver is the city that keeps on giving.)

Then we headed to Stanley Park. and sat on another bench watching an old woman feeding the swans, which based on her name tag, appeared to be her job. This woman was so concerned about the health of these swans that she would harass any of the bikers, joggers or walkers who would come within 50 feet of the swan. We assumed, knowing so little about birds, that swans don’t exist in the wild, that in fact they rely on kind women like this one to badger intrusive joggers and give the swans plenty of room to eat. “Without this woman, there’d be no swans in Vancouver” I exclaimed. A few months later our ignorant assumptions were proven wrong in France.

That evening we strolled along the north side of town looking at all the sailboats and then wandered into a random bar. We took a look around after ordering a drink, spotted the pool table and realized it was the exact same bar we’d been in 11 years ago. This time, we had just a beer or two and the power stayed on. We exited the bar and found a corner with a few hot dogs vendors where Molly again confirmed that Vancouver is truly one of the world’s great hot dog towns.

This was our day in Vancouver and it was one of our finest days in a one of the world’s finest cities.

Next, we took a car ferry to Victoria and visited Butchart Gardens. Molly’s parents had sailed through British Columbia in the 1970s and talked a great deal about Butchart Gardens so we felt compelled to visit. 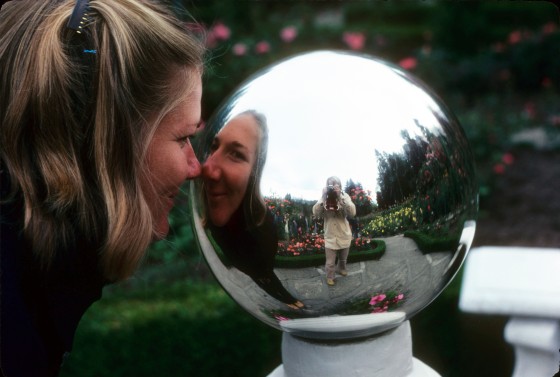 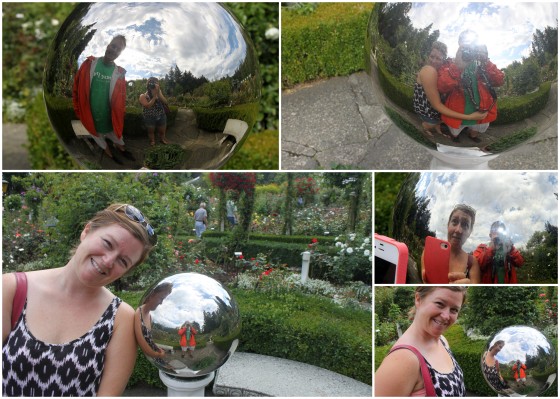 Trying to recreate Barbara’s pose, but forgetting the details

Victoria proper was quite beautiful. Here we ate oysters and drank champagne along the waterfront, walked out to the end of town where the entrance to the bay is and spent the afternoon reading in cafes in downtown. In the morning we took the international car ferry to Port Angeles on the Olympic Peninsula.