My favorite place in Paris is Rue Descartes just north of Contrescarpe. There’s a really old woman there named Françoise who lives on the second floor next to the cafe where Verlaine died and she yells at you as you walk by, asking you for cigarettes. She doesn’t have any teeth, her hair is grey and ratty and she impressively yells at you again in one language after another, though her voice is so hoarse, it’s tough to notice. A young waitress from the bar across the street kindly intercepted her when Francoise – already with a lit cigarette in hand – came downstairs to confirm that in fact we had no cigarettes to give her. She took Françoise’s arm and gently guided her down the street for a walk. “She’s crazy” the waitress said when she returned, “if you give her anything you’ll be friends for life.” The waitress explained that she owns her apartment but has no money, “she’s lived here for sixty years.” But the street itself is quite nice, turning and weaving every 50 feet or so into some new delightful half block with a fromagerie and bar before turning again to reveal a gorgeous boulangerie and quaint bistro with a small patio: the students practicing their English and reading their Foucault over beers and rolled cigarettes, small scooters whipping around the circle, the line of stoic waiters, who become extremely warm and friendly when you finally get the courage to order, “Encore deux Pernod s’il vous plaît.”

On the south side of Contrescarpe is Rue Mouffetard with it’s kilometer of patisseries, caves a vin, chocolatiers and the stores that have rotisserie chickens being cooked over roasted potatoes on the sidewalk. These are my favorite shops. We came here Christmas Eve determined to piece together the greatest meal known to man. With fresh olives, fresh brie, fresh pain naturale, twice cooked potatoes and the perfect rotisserie chicken re-heated in our apartment’s little toaster oven, we succeeded. After we bought our chicken we strolled down the little well lit alley with the cafe where the Three Musketeers used to get drunk and then walked uphill under the lights to Contrescarpe and continued on to Notre Dame, hearing the bells tolling for Christmas Eve mass.

When we came back a few days ago with just an evening to spend in Paris all we wanted to do was head to Contrescarpe and grab a drink. We ordered deux Pernod avec l’eau and watched as the lights came on in the square while the sun set. I saw a waiter point down the street and say to his friend “Voici Francoise!”  I looked over to the square and there was Francoise, our kinder, gentler Gertrude Stein, roaming the streets day after day collecting cigarettes, hopefully for sixty more years.

I’ve been to Paris four times now and though I loved the week spent with Ben and Keith as backpackers sleeping on a very overpriced floor and very much enjoyed the week spent alone with no money trading books outside Shakespeare & Co., visiting Paris with a woman, especially Molly, is the only way to go. Why don’t the guidebooks say that?

This is the best way to spend two weeks in Paris: First you rent a nice little apartment in the Marais or Latin Quarter or Ile St. Louis. You start your days drinking grand cremes and splitting pastries at a few different boulangeries and getting fresh squeezed juice at the Turkish bodegas on the sleepy backside of Montemarte. You eat a cheese and egg crepe and drink a bottle of good cheap wine in Luxembourg Gardens and perhaps even take a nap in a chair in the sun. You walk the empty path behind Notre Dame and over to Ile St. Louis and for her birthday you buy her a Kir Royal at a cafe on a busy street where you can watch the people go by. You head to down to Contrescarpe through the narrowing streets, walk just north of the square and have a wonderful meal in a tiny little place just across from the apartment Hemingway and Hadley had together, a meal with three courses and a good crisp white wine. For Molly’s appetizer they poach an egg in cream and cheese with a side of fresh bread and I sit there sipping wine, watching her eat and it is the happiest moment of my entire life. 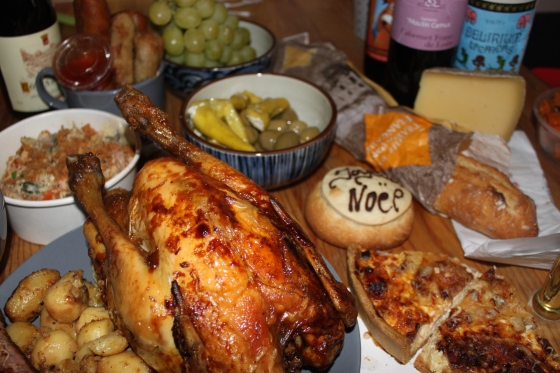 some church we happened to notice 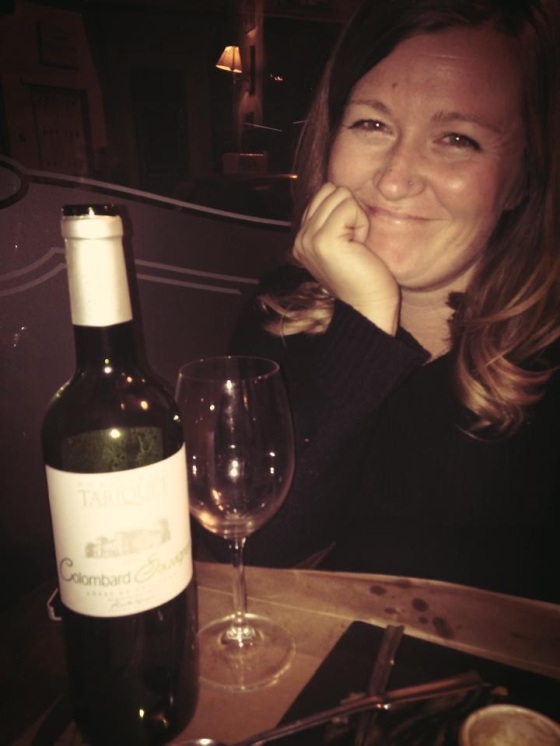