Our friend, Julian Wong, is cycling around the world. He started last summer in Murrieta, California and is currently making his way through Albania.

Julian is delivering his father’s ashes from California to China to be scattered in the province where his father was born. He biked the ashes across the United States, flew to Norway and biked through Scandinavia, Eastern Europe and now the Balkans with a winter side trip to the Middle East. He’ll continue on through Turkey, across the Caspian Sea and into Turkmenistan before navigating his way into China.

Julian – a climb to the top of the fortress in Kotor

We just met Julian, thanks to a mutual friend, Aura, who connected us via email last month. We know Aura from high school and Aura knows Julian through college…which turns out to be the same college that Molly went to (gotta love those banana slugs).

As proof that as the world gets bigger it also gets smaller, it just so happened that Julian was in the process of riding through snowy Montenegrin mountains at the exact time that we were living 20 miles away on the coast. So he visited us in Przno, a small cove south of Budva, and we had the great pleasure of his company for a week.

We had a wonderful time with good conversation and local spirits. We reminisced about growing up in Southern California (including the unavoidable discussion about where to get the best burrito) and swapped stories about college in Northern California (including tales from the UC Santa Cruz trailer park on campus where he lived for two years). He told us about his experiences in Egypt, Israel and the rest of the world he’s biked across so far. We talked about our wonderful dads and about sailboats and we exchanged experiences about life in the Balkans. We hope we helped fatten him up a little too and prepare him for his arduous trip over the Albania Alps (a place we look forwarding to driving to next month.) 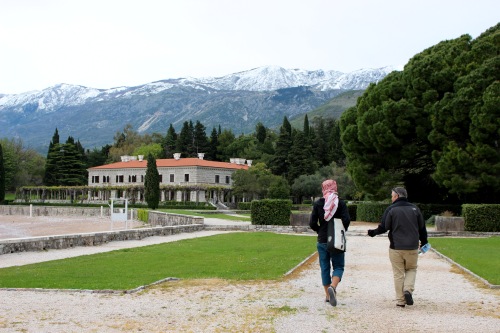 The week was capped when our high school friend Keith arrived, our first chance to see him after he spent a few years living and teaching in China and Thailand. Late in the night and a few shots of rakija down, Molly and I sat smiling and confused as Julian and Keith babbled Mandarin back and forth to each other.

Then, as quickly as he arrived, Julian packed up his bike and took off south to Albania, hoping to climb the mountains into China before the end of summer. 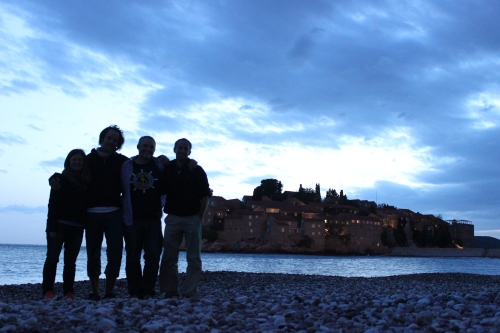 Molly, Julian, Adam and Keith with Sveti Stefan in the background

We really encourage you to check out his adventure here. His pictures of the extreme natural landscape he’s encountered are fantastic and his videos are truly extraordinary.

One thought on “Cycling Around The World”