On the second morning of our stay in Sarajevo, Adam almost choked on his Turkish coffee when I announced that I’d like to go to a museum.

The day before, we had the privilege of touring the city with a local – a friend of a friend – who, like most Sarajevans 22 years of age or older, lived through the four year siege on Sarajevo, the longest siege in the history of the modern world.

She had told us about an underground tunnel which was constructed by the Bosnian army in 1993 to allow for the transport of food, weapons, communication, fuel, humanitarian aid and people, among other things. As the only lifeline to the city, the tunnel has since become a symbol of Sarajevo’s struggle.

Wanting to learn more, we headed to the Tunnel Museum on the outskirts of town near the airport. From downtown we hopped on a street car which took us to a busy bus terminal where we grabbed a cab to take us the rest of the way. The cab driver pulled up to an old house riddled with bullet holes on a dirt road in the middle of a remote neighborhood. 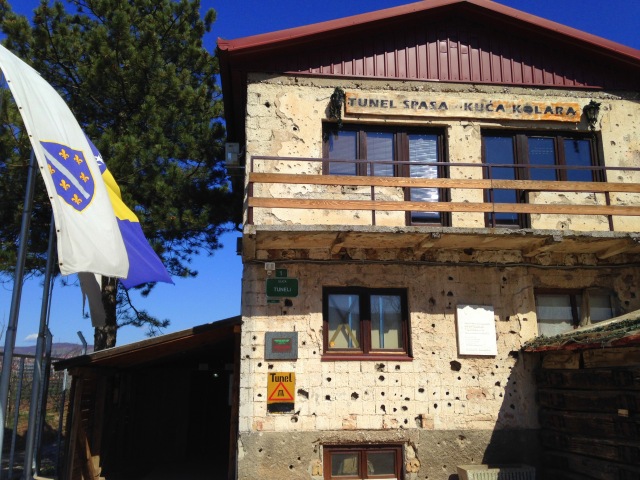 The term “museum” doesn’t really apply here, nor does it properly prepare the visitor for the simple and palpable experience. It’s not a controlled, sterile space that prohibits flash photography – it’s a small, dusty exhibit that, after the war, was built onto the private home whose cellar served as the entrance to the tunnel.

When we arrived we were greeted by a Bosnian guide in his late twenties with an impressive English vocabulary. The three of us stood before a map of Sarajevo and he energetically described the development of the siege. First he pointed out that when he uses the term, “Serbian,” he is referring to Serbian Chetnik Nationalists, a Serbian group used by Milosevic and the Yugoslav government to move into Bosnia and push out the Bosniak people. “It’s like Nazis and Germans,” he said, “they shouldn’t be conflated into a single group. Just know that there was a part of the Serbian population who felt that Serbs had the right to take over as much of Bosnia as possible and would go to great lengths to ethnically cleanse Bosniaks from the region. This group,” he added, “was funded and armed by the Yugoslav government.” 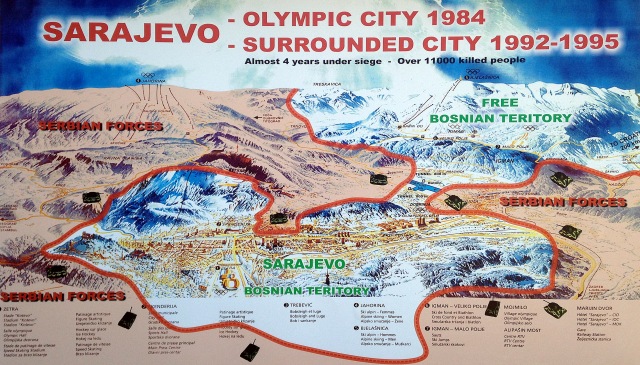 A History of the Siege (provided by Adam)

Our tour guide went on to explain that the Chetnik Army decided they would take Sarajevo as their own and push out the Bosniak population living there. Still officially under Yugoslavian rule, the Bosniaks did not have a standing army capable of preventing the Chetniks from occupying the hillside or defending the city itself. The Chetnik Army was able to surround the city, cut off its water supply, electricity and gas before the U.N. stepped in and convinced the Chetnik Army to let them occupy the airport in order to distribute humanitarian aid to the citizens of Sarajevo. Officially, the UN did not take sides in the siege, but in addition to supplying food and water to the people, they allowed journalists to enter the city and report on the conditions of its besieged citizens, garnering international attention.

But they refused to let anyone enter or leave the city. People in desperation attempting to escape would be turned back, often falling victim to Chetnik snipers in the process. In this way, the United Nations formed and upheld the boundaries of the siege. Then and now, many Bosniaks see the United Nations as the final link in the front line that held the city’s 300,000 people captive and isolated from the world.

Diplomatically at this point, the Chetniks knew they risked international intervention were they to take over the city and move out the Bosniaks, so their strategy was to force the besieged citizens to surrender. Daily rounds of mortar fire and bombing were routinely brought upon the city to try and speed up the process. Without a standing army to defend itself, nor an established resistance government (remember Sarajevo is still technically part of Yugoslavia at this point, the same country whose army is surrounding them) the international community was wary to get involved. The recent Gulf War, a new U.S. President generally resistant to foreign wars and post-Soviet Union revolutions all over the world probably contributed to this reluctance.

Out of necessity, the idea for a tunnel was born, reestablishing communication between Free Bosnia and Sarajevo, enabling more supplies to be brought into the city and most importantly, allowing for arms to be transferred into the city so that the citizens and the newly formed Bosnian Army could defend themselves against their invaders. The U.N. knew about the tunnel and did not interfere in the construction, nor did they assist in its creation. The symbolism of a tunnel built under the U.N. base seemed especially poignant. Because Russia and China were pro-Serbia and had the ability to veto all U.N. actions, all the U.N. could do for four years was distribute food and supplies and turn refugees back into the crumbling city. The United Nations was left impotent to do anything to actually end the siege. The day we visited the Tunnel Museum, Russia invaded Crimea and we were all reminded that the United Nations had no direct authority to stop the invasion, highlighting, again, how the very nature of the United Nations precludes its ability to be effective in preventing or ending many of the world’s crises. Our guide probably said it best: “If the U.N. does show up at your door it probably means you’re already fucked.”

The arms delivered through the tunnel allowed for the creation of a standing army and the ability for Bosniaks to defend themselves. The presence of an on-the-ground force persuaded NATO to intervene and bomb the Chetnik forces knowing that a Free Bosnia could eventually be formed to protect itself. Within just a few days of bombing, the almost four year long siege was over. The Dayton Accords were eventually signed, creating a new country, Bosnia and Herzegovina, along historical lines. Included in this country was a territory called the Republic of Srpska, the area of Bosnia that Serbs had settled in. To this day it remains a divided country.

(a return to) the Tunnel Museum

As more visitors were waiting in the cue, our tour guide wrapped up his talk and pointed us towards a small room which played an old video on loop. It was footage of the siege and scenes from the tunnel – men in uniform transporting guns, an old man pulling a goat through the two feet of water which had collected at the base of the tunnel, an old woman in a rudimentary wheelchair being pushed along the tracks and people transporting humanitarian aid from the outside world. There was a scene of a Bosnian woman standing outside the entrance of the tunnel with a jug of water for weary soldiers coming from the other side.

After the video, you can actually venture down into what’s left of the tunnel (about 20 meters), which is a little over 5 feet tall and little under 3 feet wide. The tunnel was originally 800 meters long (connecting the neighborhoods of Butmir and Dobrinja) and the site of the museum sits on the entrance to the tunnel in Butmir. 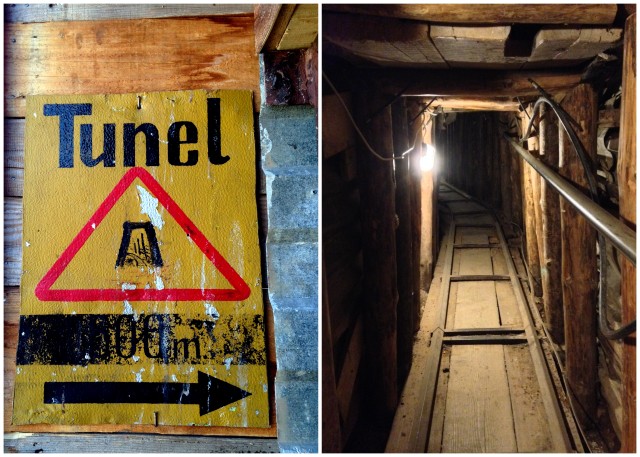 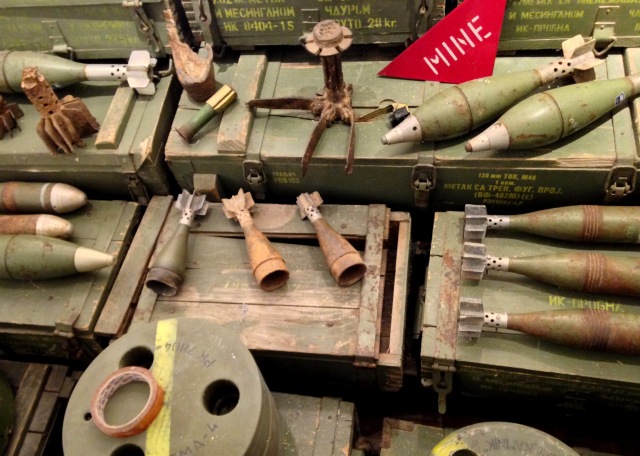 After viewing a handful of old pictures and military equipment preserved from the war, we returned to the ticket booth to ask about how to get a ride back to the bus terminal. It was a slow day at the museum and all three men on staff, including our tour guide, were inside the booth playing World of WarCraft. They recommended that we ask one of the neighbors to give us a ride back to town.

We knocked on the house next door which had some postcards and museum souvenirs out in front. We were greeted by a big, affable guy in his late 50s with a booming voice and a mischievous sparkle in his eyes. He handed the grandchild in his arms to his wife and asked us to name a price for our return trip, then we all piled into his car. He kept apologizing for his broken English as he regaled us with one story after another and a joke about Bill Clinton and Monica Lewinsky that clearly had gotten some mileage.

It turns out he was a soldier in the Bosnian army and had worked on the construction of the tunnel next door to his house. He mentioned with irritation that he can’t get a job at the museum because those jobs go to kids from the city.

He drove us all around the Butmir neighborhood showing us houses and hillsides where fighting took place during the siege. He pointed out buildings where Chetniks snipers sat year after year picking off Bosniaks as they carried supplies towards the tunnel. Then he took us to a small concrete bridge. “We built this bridge first,” he said, “in order that metal and supplies could be brought to build the tunnel. Before tunnel, was bridge!” he exclaimed.

Then he pointed to the mechanic shop where his son works. “My son is only child,” he said, “Not good to have only child, they need other child to grow up and play with.” After learning that we don’t have any kids, he told us we should definitely have some, either two or three but definitely not one.

Heading towards the bus station, he pointed out more areas where many locals were killed during the war, getting shot trying to cross the street or on their way to get food or just hit by random bombs dropped sporadically to keep the people in fear. “Many people die,” he said, “but my family was lucky.” Then he told us that his wife was 8 months pregnant when she was hit by shrapnel. “She survived,” he said, “but baby girl did not.”

(another return to) the Tunnel Museum

Seconds after he dropped us off at the bus station I realized I had left my phone on the backseat of his car. We quickly grabbed another cab and headed right back towards the museum. When we arrived at his house, our new friend wasn’t there. But our cab driver, knowing very little English, yelled to a neighbor who was outside, who got on her cell phone and then yelled back to our cab driver. Minutes and several dirt roads later, we rolled up to a neighborhood barbershop to find our friend standing outside, hair partially cut, wearing a wink and a cape and holding my phone. As we parted company (again) he took my hand and with a smile imparted his advice once more:

“If your husband bother you, you come to Bosnia, you will be happy. And remember: TWO or THREE kids, NOT one!”

9 thoughts on “The Siege of Sarajevo & The Tunnel Museum”