To me, common things found in other countries’ grocery stores are some of the most interesting parts about traveling. And not just the items themselves but how they’re organized – when we were in Berlin we entered a supermarket chain to buy cereal and found that the cereal isle shared its spotlight with the underwear section. In the French Intermarché chain where we do all of our grocery shopping, you can buy a flat screen t.v., new pajamas, kitchen appliances, school supplies, a sewing kit and jewelry, all in one fell swoop.

I wanted to share a list of a few everyday, and a few specialty items that have found their way into our carts, and (do I go for it?) – into our hearts.

Although not a far cry from an average grocery list, butter has never been a regular player on mine. In the U.S., I rarely cook with it unless I’m making this fabulous recipe and I have no need for it on bread, because I’m not big on morning toast made from bagged bread. I’m not a bread snob, per say, I just can’t be bothered to eat it by itself unless it’s fresh and amazing.

In France, however, butter has slid its way into our daily lives. It’s a massively popular ingredient in French cooking and baking – plus it’s a breakfast staple, along with fresh bread and jam.

Pineau is a fortified wine that can only be made from grapes that are grown in the Cognac region where we live. Though there are tons of family owned pineau distilleries in the area that one can visit for tastings, they are closed in the winter so we’ve been enjoying the local brands found in the supermarket. The blanc version which tastes more like a sherry is dryer and makes for a great aperitif, where the rosé which tastes more like a port is sweeter and makes for a yummy digestif. (More about pineau on our blog here.)

I was turned on to tagliatelle through The Bonne Femme Cookbook and it’s my absolute favorite. It’s an egg-based pasta widely used in France and best of all, it comes in the form of small pasta nests which are delightful to plop into boiling water and watch unravel. This kind of pasta is especially tasty in cream-based sauces.

You can find a huge assortment of mustard in French grocery stores. If you recall, Dijon – known far and wide for its mustard – is a city in France. This particular brand comes in a glass container with a plastic lid. It’s not only incredibly classy for mustard but it’s multifunctional. And speaking of classy, once I’m done enjoying my mustard, I’m rewarded with a brand new wine glass. 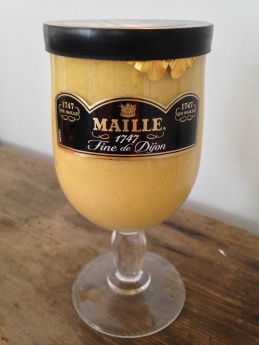 Along with the vast assortment of mustards, there’s also a liberal assortment of mayonnaise, all delicious. French mayos are a natural golden color and appear to have far fewer preservatives than their American counterparts. Mayo is really popular in Europe and rather than ketchup, it is the default companion to french fries (which the actual French call frites.) In McDonalds you are given the option between ketchup or mayo. How could I possibly just choose one?

A delightful detail in the mayo below is that the tip comes in a star shape in case you want to pipe it decoratively onto something. In a fair amount of Spanish and French menus we’ve seen a deconstructed (or maybe just simplified) deviled egg where they just cut a hard boiled egg in half lengthwise and then top the yolk with mayo and a garnish like in this recipe.

This lettuce mix of mâche and arugula is widely available in France. The mild, nutty flavor of mâche (in the bibb lettuce family) works well with the peppery contrast of arugula. For the first time ever, I’ve been ignoring my instincts to add a lot of ingredients to a salad (or forgoing the option completely because it’s too labor intensive) and I’ve just been grabbing a handful of this salad mix and tossing it with a simple dressing made from oil, vinegar and a little dijon mustard – the perfect fresh balance to a butter-filled meal.

I’ve never been big on buying liqueur because I feel like you buy it for a specific cocktail, use it once and then it sits on your shelf until the end of time. Since we’ve been in France, I’ve been turned on to a drink called a kir which became popular in French cafes in the middle of the 19th century and are still popular today. A kir is simply dry white wine or champagne with a touch of crème de cassis, which is a sweet, dark red liqueur made from blackcurrants. I don’t like my drinks very sweet so I only add a touch and love it every time. Crème de cassis can be especially helpful if you find yourself with a bottle of white wine that you’re not in love with. Just pop in some of that lovely red liquor and viola(!) fun cocktail that will never disappoint.

Our search for bacon at the local grocery store resulted in the appearance of Lardons, which is the French equivalent. It’s pork belly cut up in small pieces and can be flavored with smoke. At first we were suspicious of this bacon imposter but now we wish it was available back at home. Without having to get your fingers greasy by cutting up and separating bacon, you can toss these small chunks into a pan straight out of the container, brown them and add them to anything – and everything.

But what about cheese (?!) you might be wondering. Well friends, I’m glad you asked. That’s a topic for a whole new blog. 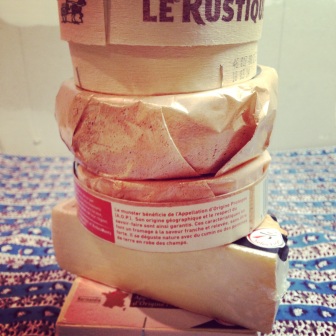