For the second half of my mom’s visit we packed up the car and drove to The Loire Valley, well known for its gorgeous châteaus and manicured gardens. Because we’re touring during the off-season, there’s not nearly as much open as there would be during the spring and summer months, but we get to benefit from having entire castles to ourselves, a choice that we’d make time and time again.

Our first stop was Azay-le-Rideau, build in the 1500s on a natural island in middle of the River Indre. We took a self-guided tour through the château which is one of the best preserved and restored in the region. My biggest takeaway was that in the 16th century is was commonplace for nobles to spend most of their day, and do much of their work in bed. They would even greet their guests and take meetings in bed, being the most comfortable and elegant place in the house. Makes sense to me, as my desk and bed are one in the same.

Our next stop was Château de Villandry, famed for it’s landscaped gardens. 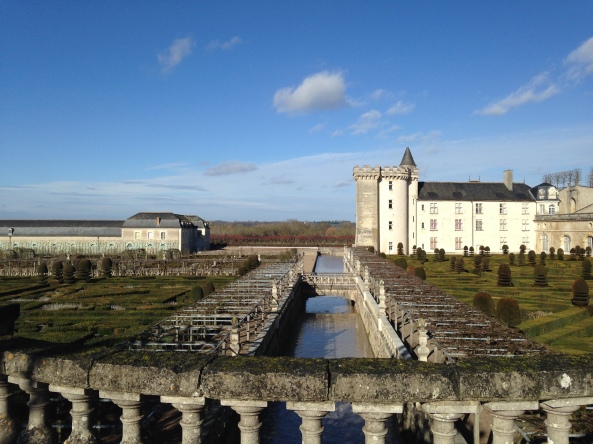 The flowers were not in bloom but the gardens were spectacular none the less. We spent a couple of hours wandering about the grounds and didn’t see another soul. 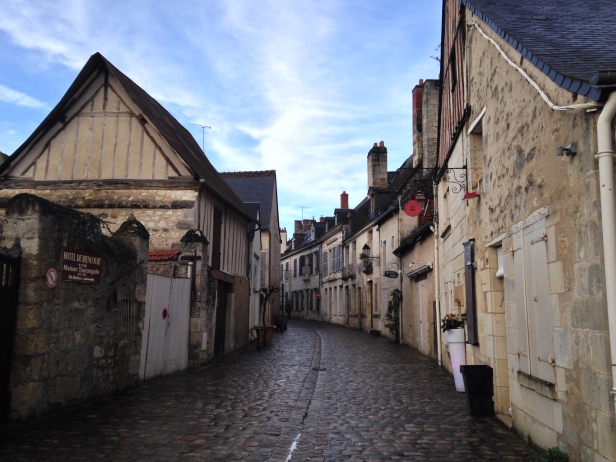 The sleepy town bordering the chateau

From there we headed up to a very rural piece of Normandy, home to one of the most visited sights in France, Mont-Saint-Michele.

The long history of Mont-Saint-Michel is thought to date back to 708, when Aubert Bishop of Avranches, had a sanctuary built on Mont-Tombe in honor of the Archangel. The mount soon became a major focus of pilgrimage. In the 10th century, the Benedictines settled in the abbey, while a village grew up below its walls. By the 14th century it extended as far as the foot of the rock. An impregnable stronghold during the Hundred Year Wars, Mont-Saint-Michel is also an example of military architecture. Its ramparts and fortifications resisted all the English assaults and as a result the Mont became a symbol of national identity. Following the dissolution of the religious community during the Revolution and until 1863 the abbey was used as a prison. Classified as a historic monument in 1874, is underwent major restoration work. Since then, work has gone on regularly all over the site. Mont-Saint-Michel has been listed as a World Heritage Site by UNESCO since 1979.

Before taking the shuttle across the bridge to the “island” – where we stayed for two nights – we parked alongside a dozen other cars in a desolate Disneyland-sized parking lot. What would have otherwise been an insufferable tourist experience in the summer, was really relaxed and enjoyable in January. We leisurely toured the massive, elaborate and awe inspiring abbey, trying to wrap our heads around how its construction was ever humanly possible. We walked up the island’s steep stairs and narrow alleys catching dramatic views of the dark English Channel and the sparsely populated mainland – Normandy to the east and Brittany to the west – almost making us forget about the $12 glasses of wine we had for lunch.

The tides of Mont-Saint-Michel are some of the most drastic in the world. Within hours, the island can go from being surrounded by wet sand to so flooded that the road to the island is impassible. We were fortunate enough to arrive within 48 hours of the full moon and witness this extreme change. 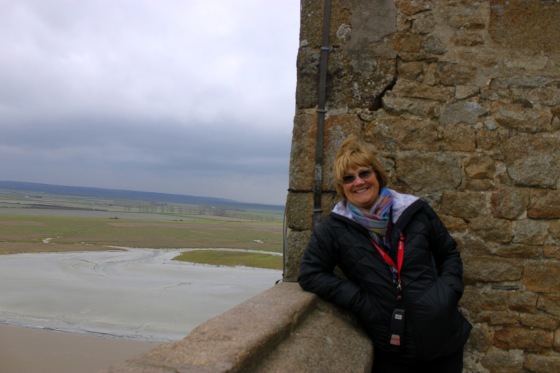 Our final stop – Paris – where after two days of walking, cafes and crepes – we bid Babs adieu.

2 thoughts on “A Babs about Town – Part Deux”