The evening we arrived here in Bassac, one of the first things we noticed was the abundance of closed shutters. 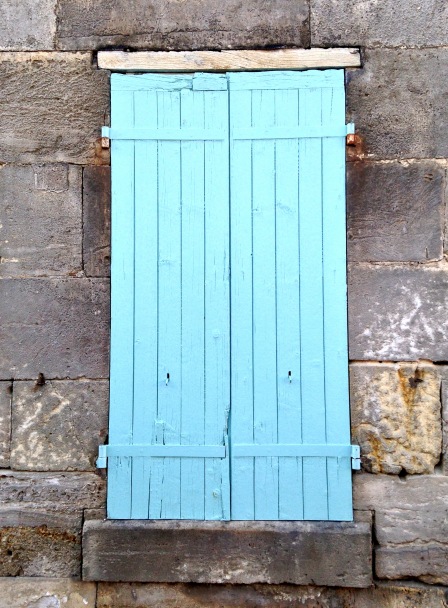 By the way, if the topic of shutters doesn’t grab you like it does the rest of us, you might as well stop reading now.

Last month, I was reading a book called Sixty Million Frenchmen Can’t Be Wrong which has a chapter on public vs. private space in France as compared to various countries and cultures, using the openness of one’s home as a barometer. This reminded me of my own traveling experiences where the cultures I’d visited operated far more publicly than I was accustomed to. I’ve seen many homes in Mexico without walls let alone doors. In countries across Latin America, I’ve peered into people’s lives through open doors and windows or better still, in front of homes and in the streets. In Vietnam and Cambodia, Adam and I were surprised to find that the insides of many homes were totally exposed day and night – and activities like cooking and eating took place on the street and sidewalks. Compared to Bassac, event my parents’ house in suburban San Diego seems exposed – many of their windows don’t have curtains and the ones that do, are rarely put to use. The differences in privacy between cultures probably has a lot to do with climate and adjacency to one’s neighbor, but regarding France in particular, the book described homes and shutters as part of the French culture’s intuitive sense of what’s intimate vs. what’s public.

“The French house is a categorical affirmation of its owners’ privacy. You never see the inside of people’s homes from the street. Houses in Paris actually turn their backs on the street; the facade is rarely as interesting as the inside courtyard. On the street side, windows have thick curtains or shutters that block out the world.

In North America, window shutters are decorative planks fastened to the outside of houses, but the French use them, almost religiously. In every household we visited, in every part of France, summer or winter, our hosts went through the same ritual of opening all the windows, opening or closing the shutters, and then closing the windows. Thanks to this custom, whole streets in French cities and villages are blacked out at night.”

The book suggests a theory that I really enjoy – that maybe this ritual goes back a long time ago (like most things here) to a 400 year old tax evasion scheme called la taille (the cut) where rates of taxation were based on apparent wealth. That apparent wealth was determined by a local delegate/peeping Tom who would peer into their neighbor’s windows to determine how much stuff they had in their homes.

Thus far, we too have participated in the twice daily ritual of opening and closing shutters – it’s become a satisfying marker of the day gearing up or winding down.

The windows open into the house, perhaps so that the occasional passing car won’t knock it off of it’s hinges. When the wooden shutters are shut, you are totally closed off to what’s going on around you. Unlike curtains or miniblinds, there’s no chance of peeking outside without going through the whole ritual, not to mention letting in the cold and completely exposing yourself to what you intended to clandestinely peek at.

So for now, we’ve had to experiment with other methods of keeping a close watch on our neighbors: 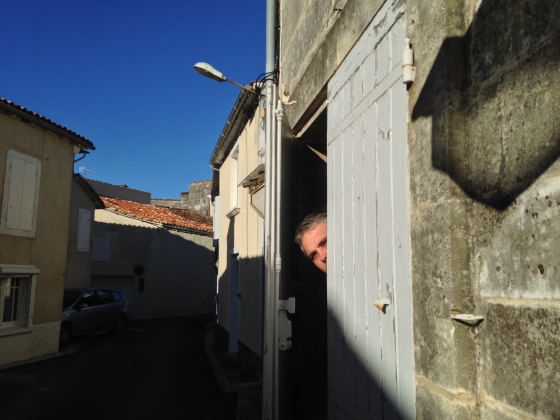 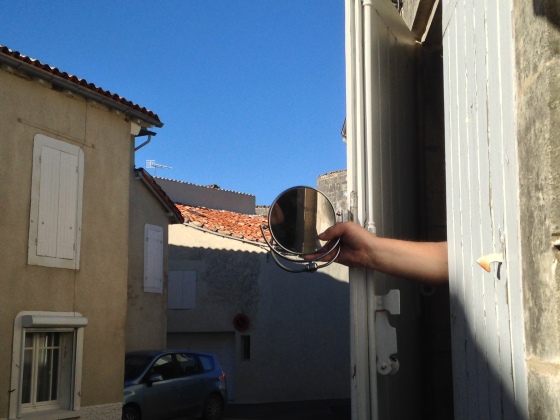 4 thoughts on “The Shutter Ritual”